Our Law Firm attended the Exhibition of American Hellenic Chamber of Commerce. 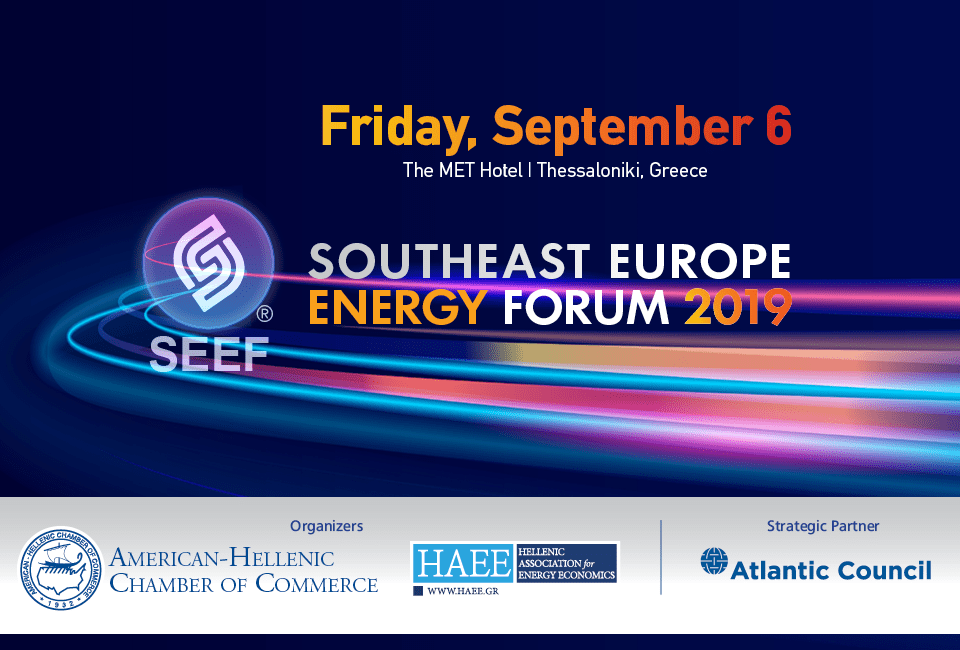 The Managing Director Mrs Kokkoraki Maria represented our Law Firm  in the Exhibition of the American-Hellenic  Chamber of Commerce “Southeast Europe Energy Forum 2019” that took place in MET Hotel of Thessaloniki on 6-9-2019 in light of  the 84th International Exhibition of Thessaloniki.

The Southeast Europe Energy Forum 2019 was completed with great success and with a large number of participants, which was organized for one more year by the American-Hellenic Chamber of Commerce in partnership along with the Greek Tank Thinking for Energy Economics (HAEE) and the contribution of Atlantic Council on Friday, 6 September 2019, in the MET hotel of Thessaloniki.

In the process of Southeast Europe Energy Forum, which has evolved into an institution, they appeared serious representatives of the political scene from Greece and Southeast Europe while also appeared agency representatives, experts, academics and experienced executives of leading Greek and foreign companies in the energy sector. During the Forum all the crucial issues presented and discussed, that related with the energy sector, the current developments and the future challenges.

Τhe general manager of American- Hellenic Chamber of Commerce Mr ILias Spyrtounias introduced with his speech the projects  of this Conference.

In his speech the President of the American – Hellenic Chamber of Commerce Mr Nikolaos Mpakatselos stated: “It is now clear that Greece is on energy map. According with the constructing plans of transmission pipelines gas and with the given process to be finished, our country will be shown to a focal point for the energy transmission and therefore  its geopolitical position, political strength and influence will become stronger while at the same time it is given the chance to be financially improved. Furthermore, the discovery of significant hydrocarbon deposits in Israel and Cyprus and the expectation of utilization similar deposits in Greece, have change significantly the standards and it seems to be a major  opportunity for our country – as much as the interest of an international factor which is  focused on Southeast Mediterranean for the energy. The current government integrates in its  major development actions for Greece the energy sector and  I consider that it will promote  a series of partnerships and co operations in South East Europe and therefore make it even stronger the importance of Greece in the region. The investing friendly policy which is implemented, we expect to bring a new dynamic approach to the subject of attracting investments, which it will be a fact that contribute essentially to improve our economy. There is an interest  at least in USA which they have already confirmed  that  both the ambassador Mr. Pyatt and the Minister of Commerce Mr. Ross who we have the pleasure to join us in the discussion panel and changing views  along  with our member-companies. Beyond that, it is a proof of importance the fact that the energy is one of the 5 discussion pillars  in light of the strategic dialogue between USA and Greece.

The USA ambassador Mr Geoffery R. Pyatt during his speech stated: “we have arranged to cooperate with our Embassy in order to detect the investing opportunities in energy sector and contribute to prepare the visit of Greek Prime Minister in New York. These are the ideal opportunities to show to the American investors that Greece is now mature for investing new capitals, including sectors such as renewable energy sources and energy storage where the American technology is the leader”.

Dr Kostas Andriosopoulos, President of Greek Tank Thinking for the Energy Economics (HAEE) and President of Committee on Energy of American Hellenic Chamber of Commerce, Professor of Economics and Energy, stated: “The Southeast Europe Energy Forum has grown into an institution for the Northern Greece and especially in Thessaloniki and I would like to thank for our sponsors and support. Today we are going to discuss about the plan of the current government and ministry for anything about the implementation plans for the energy and climate in order to achieve our national goals until 2030, for the funding plans of domestic and foreign institutional investors. We will explain the process of  privatizations in the energy landscape, the infrastructural developments, especially the natural gas that became the transitional fuel and the role of USA which is now very significant for this sector. Finally, we will talk about the entry of the electricity market, the changes needed regarding the regulatory framework and simplifying procedures in order to achieve the essential for our country “revolution of APE” and we will talk about the highly anticipated entry of the Stock Exchange Energy Market and we will close  with the positions of the Greek Ministers and neighboring countries on the regional perspectives. We believe that the region turns into an energy crossroad and Greece always in loving cooperation with its neighbor countries, can take a leading role”

The Minister of Environment and Energy Mr Kostis Chatzidakis during his speech stated that the natural gas has a strategic importance for the government and the implementation and the promotion of long-term energy infrastructure projects will be the center of the government’s New Democracy efforts.

The Deputy Minister of Environment and Energy, Mr Gerasimos Thomas, one of the things he stated was that the government’s objective is our country, to be a strategic player in order to cooperate closely along with partners on all energy security issues and energy process.

The General Secretary of Environment and Energy Ministry, Mrs Alexandra Sdoukou, said  that the development of clean energy, with the maximum utilization of all of post-mortem programs, has to be the future that it has to concern all of us.

The topics which presented and discussed during the Southeast Europe Energy Forum were: