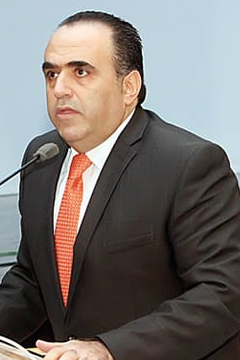 Lieutenant General (Ret’d) Emmanouil Sfakianakis worked in the Police for 34 years, 23 of which he was engaged in the investigation of cybercrime. He was the founder of the Cyber Crime Division of the Hellenic Police. During his career, he handled more than 10,000 serious cases out of a total of 28,000 involving cybercrime. His career in the Hellenic Police ended in January 2017, when he was leader in Europe and the head of European Programs. During 2015 and 2016, he led four European Operational Actions under Europol EMPACT (European Multi – Disciplinary Platform against Criminal Threats):

He studied Computer Analysis and Programming. He was trained in London in Plastic Crime and at the FBI on Cyber Terrorism. He holds Master’s Degrees in “Criminal Sciences” and in “Criminology” from the Faculty of Law of the National and Kapodistrian University of Athens. He is a PhD candidate in Informatics at the University of Piraeus.

He has participated as a keynote speaker from 2001 to 2016 in 875 national and international conferences of INTERPOL, EUROPOL, University Institutions, International Organizations, etc.

He is the founder and president of the CSI INSTITUTE (Cyber Security International Institute), a non-profit association, which aims to educate, prevent and inform all citizens, about safe internet browsing and to strengthen entrepreneurship.

He is a professor at the University of Piraeus, at the Police Academy, and at the National School of Judges. He is the author of 7 books:

The last three are a children’s book series that has just been released.

He also created the CYBERKID application and was awarded the Gold Award at the Mobility Forum & Apps Awards in 2015.